Heeee, sliding in stocking-feet on my new hardwood floors is AWESOME. <3

Fashion Show this Saturday! I'm helping out, serving cupcakes and helping the models get on the runway. I'm excited to see everyone's outfits. All are welcome!

Also also, I need to stop listening to "Motor Cycle" by Bump of Chicken. It is consuming me.

Hooray, Tegamibachi Season 2! Reverse! Not a huge fan of the new opener (hard to follow Suga Shikao and a dreamy offering from Seira) but I liked the new ender.

ZIGGY PEPPER IS SO COOL

EVEN BY LETTER BEE STANDARDS, THERE WAS A LOT OF CRYING

THE PARTY IS STILL AWFUL. WHY WOULD YOU DO THAT. NO ONE WOULD THROW A PARTY. NO ONE.

I still love it! This series couldn't be more perfect for me if it involved genetics and house rabbits.

And on that note, cosplay productivity!

One Noir armwarmer is done! (Well, mostly done, I have to weave in the yarn ends, and decide if I want to put a contrast trim on there. I probably do not.) Now... to do the same thing all over again! Even though most of this will be hidden by my GOTH PONCHO with CARGO POCKETS. Yessssssss

The only thing that is keeping me from killing myself is Bee Gundam.

[continues sobbing on the floor]

I cried, but I still managed to laugh at the opener, because "I'M A FUCKIN' BADASS MOTORCYCLE FALDIO" makes me laugh EVERY DAMNED TIME. ... I think I'm going to go watch it again to cheer myself up. ... Yup, still funny!

Anyway, they've got a lot to cover in 8 episodes. Good luck, Valkyria! That Empire isn't going to wipe itself out, y'know!

Isara costume is coming along. Jacket is almost done, skirt needs stripes and a hem, and then about 30,000 accessories left to go. ... eek.

Yesterday was supposed to be:
*Sewing
*Party at Sam's

Instead it was:
*Feeling sick
*Watching Spongebob on the couch

D: I'm not supposed to get sick on weekends, that's hardly fair. And I didn't make any cosplay progress. (Unless you count catching up on the Valkyria anime and discovering that Boyfriend's character does indeed make a cameo. And yeah, 2nd OP = SPOILERS.)

But I did have a wonderful chat with Minako-chan on Skype, where we got to dish about Half-Blood Prince and Torchwood and writing and what constitutes a spoiler. ^_^ I don't have a webcam, so I could see her but she couldn't see me (and my TOTALLY RAD official-goods Haro headset microphone). I may have to rectify that for next time.

Big Lab Project Mach II is off the table at the moment, I haven't heard anything in 2 weeks (and I thought I was going to be in Philly by now). Instead, Big Stem Cell Project continues! It's kind of tedious (sterile technique basically equals "Don't touch anything, and if you do, hose yourself down with ethanol) but I think/hope it's making us lots of money, at a time when we really need money.

I've been watching True Blood while finishing up my Isara poncho. I see why everyone's been talking about it, it's very entertaining. Many of my relatives on the Gulf Coast are exactly like these people, for better or worse. Just fewer vampires (I think).

And since I'm working on Valkyria, I started up the anime tonight... very different tone from the game, but I'm enjoying it. Ringo says there's a shower scene in episode 4, which I must get to ([sniffles] Gundam Seed nostalgia!). And Isara kicks ass (in her lovely calm, collected manner), which I love.

But the REAL winner anime of the season is OBVIOUSLY Sengoku Basara, which I CANNOT GET ENOUGH OF. IT'S DELICIOUS HISTORICALLY-IMPAIRED CRACK AND I HEART IT. I squeal with glee every time Takeda and Yukimura start going at it. <3 <3 <3 IT'S AMAZING AND I WISH EVERYTHING WAS EXACTLY LIKE IT. (I exaggerate to keep with the MANLY SPIRIT of the show. [burning fist])

I watched the Tegamibachi ("Letter Bee") anime special last night, and loved it ♥

This surprises no one, I'm sure, because I heart the manga so much that anything vaguely letter and/or bee related makes me giddy with delight. But honestly, it was a good little special and they'd better give me a TV series. (I want those character sketches SO BAD.)

The art direction was all over the place. The director couldn't seem to decide if he wanted to go for a 2-D Storybook feel, or a dimly-lit gloomy feel, or a sweeping-landscape-dreamworld feel. (The almost compulsive need to identify every scene location by name made me laugh.) But that said, I didn't think any of the styles were a total miss. The CG battles look a little silly if the overall vibe is Storybook, but otherwise I liked it. It's German fairytale mixed with classic shounen elements, so I won't fault the staff if it comes out looking a little confused.

I would caution against them using the dimly-lit gloomy feel, because then the comparisons to Fullmetal Alchemist might bury it. (But I loved the look of the firelight scene when Nakata Jouji's character and Lag discuss Gauche's gun, so... well, just run with it either way. ^_^) Aria as a blonde (and relegated to carrying around stacks of papers) IS just Riza Hawkeye with glasses, which is a bit disappointing; I look forward to some of her flashback stuff.

I bet the audition process for Lag was awesome. "Can you yell and cry? Can you fight and cry? Can you eat and cry? Can you cry in your sleep?" If you don't find his near-constant poro-poro sobbing at least a little endearing, then run away from the series now, because it doesn't get any better. It's one of the reasons Niche is such a great partner for him. And speaking of Niche & Steak, the fansubbers misinterpreted a line about Niche as being about Lag and assumed he was a girl ;^_^ and granted, he's young and Miyuki-chan plays him with a higher voice (and he cries a lot), but Lag is a boy. ...Now I have that Always Sunny song in my head again.

I leave for St Louis again on Monday, for another two week stint. It's cold and sunless there, but the hotel is nice and they do the dishes for me. But before all that, delicious turkey! Have a nice Thanksgiving, US FL, and a pleasant Thursday to the rest of you! <3

Friday night Lauren & I went to Disintegration at Bender's, since the theme was "Victorian Apocalypse" and that's very relevant to our interests. It was really excellent people-watching, I enjoyed the primarily thirty-something crowd (and the somewhat perplexing Hipsters standing to the side who didn't move the entire night). Our corsets were a hindrance to dancing, alas, but we looked hot. :D

We went out for cupcakes with the lolitas later, and I made the unwise-yet-unregretted decision to stay up until 3 a.m. to try and win a Volks BJD from their online after-event.
( Collapse )
tl:dr, I got the Shinsengumi doll I wanted and didn't get called in to work immediately thereafter (which I would have deserved, but would have SUCKED) and I'm both lucky and happy. :D

Saturday night I went to Sam's birthday party at the local burlesque club, but only got to stay for a few minutes before the pager went off. T_T Actually, we have BLACKBERRIES now, so I look much cooler. But god they're heavy. Sorry Sam, next time!!

I just finished the first season of Gundam 00, and if I may say "HOLY SH!T", I will. My reviews have been mixed (see: Initial Reactions and A Couple episodes in), but Mizushima-sensei really managed to make an impressive piece of work whether or not it was a Gundam. The characterizations were still hit or miss, and I was STILL not impressed by the female cast up until the end. That is a HUGE loss from what Seed gave us. Mizushima-sensei does a little too much telling and not enough showing, in high school English terms. But by the end, it (to coin a phrase) pulls a Geass, by staging a huge paradigm shift built on a mountain of corpses, necessitating a complete redesign for the next season.

Yes, there was about a 5 minute period there at the end of episode 25 where I was shrieking at my monitor, swearing vengeance on Mizushima-sensei, and vowing to not watch season 2. Let's just say, it recovered. ;)

Colorado was in excellent form this weekend, with a gorgeous 74 degrees on Saturday, followed by 5 inches of blowing snow on Sunday. That's not good for anyone's health...

Unfortunately, the blizzard conditions meant it was best to postpone my photoshoot with Digital Dreams and Shock Value, sad face, but it looks like they got some amazing photos out of their collaboration on Saturday, so I can't wait to see more of those! :) But the upside was, I had a super-awesome Sunday of alone-time and productivity. XD I was in my pajamas all day! Score!!

Besides sitting around playing love sims, I watched some Kyou Kara Maoh (which is NOT a love sim, despite its best efforts) while sewing for Wasabi. KKM has gotten so good again! I'm approaching the end of the second season, and the guys all heading to Earth together had me absolutely rolling. I was laughing so hard, I had to pause the video at the kiddie pool scene, no lie. Sure the quest stuff is interesting, and the angsty stuff is probably necessary, but this kind of comedy is really what makes KKM great.

But late last night, I finished this:

But now I have to tear up the bottom and stain it, which will be sort of depressing because I think I did a fine job on it. ;_; I'm cosplaying Arashi, from the inexplicably flipped teams in Tsubasa. Figuring out a good way to do the hood was a bit annoying x_x But if anyone else wants to join, I've got lots of hints now! :)

Anyway, need to get up early tomorrow to buy bagels for a department meeting. Remember the bagels, Mako-chan!

I finally finished my Gurren-dan hoodie... I started the project over a month ago, set down the applique when I got sick of it, and just managed to complete it today. 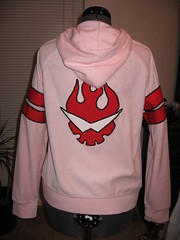 I think it turned out cute, so I'm happy! The red parts are the very very last of the Shinku fabric (I've got about a fat quarter left) and the black trim was all hand-stitched (hence the month-long hiatus).

I didn't really intend to make a full Nia costume, I just wanted the jacket >_>
But we'll see, 'cause it's kinda like "Well, you've gotten this far, just suck it up and make the damned thing".