I wrote ANOTHER REVIEW!

It's set in an ALL GIRLS SCHOOL!

HAVE YOU FALLEN OUT OF YOUR CHAIR YET?

It's very cute. And has a running gag about being burned at the stake, which is super black humor for a moe girl story.

OH, also also, I bought myself a "Good Job in Philly" reward:

Back in September, I finally broke down and ordered a Customhouse Mars doll. I've been loving that sculpt since forever (or at least, since I bought Jun-kun back in 2006, which is pretty close to forever) but never bought one. I was nervous about the Little Juniors in general, as they are a weird in-between sized doll, so there are very few clothes and shoes made for them. Would Mars look okay with my other dolls? And why do I like dolls with such miserable expressions? o____o

Anyway, Customhouse won me over with a Buy-one-get-one-free sale. And rather than buy two different Little Juniors... I just bought two Mars dolls. XD

Six months later (...yeah, Customhouse isn't the speediest crew, but I knew it was on fire), I've got my new babies! 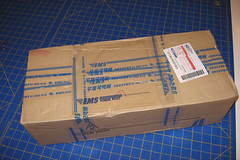 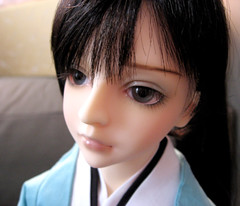 Friday night Lauren & I went to Disintegration at Bender's, since the theme was "Victorian Apocalypse" and that's very relevant to our interests. It was really excellent people-watching, I enjoyed the primarily thirty-something crowd (and the somewhat perplexing Hipsters standing to the side who didn't move the entire night). Our corsets were a hindrance to dancing, alas, but we looked hot. :D

We went out for cupcakes with the lolitas later, and I made the unwise-yet-unregretted decision to stay up until 3 a.m. to try and win a Volks BJD from their online after-event.
( Collapse )
tl:dr, I got the Shinsengumi doll I wanted and didn't get called in to work immediately thereafter (which I would have deserved, but would have SUCKED) and I'm both lucky and happy. :D

Saturday night I went to Sam's birthday party at the local burlesque club, but only got to stay for a few minutes before the pager went off. T_T Actually, we have BLACKBERRIES now, so I look much cooler. But god they're heavy. Sorry Sam, next time!!

I just finished the first season of Gundam 00, and if I may say "HOLY SH!T", I will. My reviews have been mixed (see: Initial Reactions and A Couple episodes in), but Mizushima-sensei really managed to make an impressive piece of work whether or not it was a Gundam. The characterizations were still hit or miss, and I was STILL not impressed by the female cast up until the end. That is a HUGE loss from what Seed gave us. Mizushima-sensei does a little too much telling and not enough showing, in high school English terms. But by the end, it (to coin a phrase) pulls a Geass, by staging a huge paradigm shift built on a mountain of corpses, necessitating a complete redesign for the next season.

Yes, there was about a 5 minute period there at the end of episode 25 where I was shrieking at my monitor, swearing vengeance on Mizushima-sensei, and vowing to not watch season 2. Let's just say, it recovered. ;)

I finally took some photos of Jun-kun with his new hairstyle. I didn't like him with any light-colored wigs until I saw this brown/pink mix that just POPPED with his gorgeous purple eyes. He looks a lot younger with it! 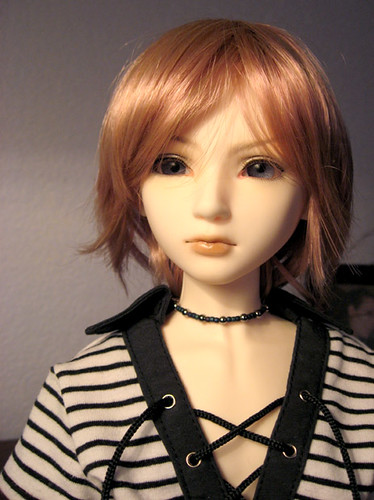 (Psst, Bev made his necklace, go buy her stuff XD)

Anyway, Kaoru-kun is jealous of Jun's new 'do and would be getting one of his own soon if he didn't look So Fucking Cute with the widdle hat mummy made for him. XD Gomen, Kaorin, I'll sew you some more shorts to make up for it.

(P.S. Why yes, that is a photo of me & Minako-chan singing karaoke in the background. XD)

The clear-headed version of my angry post from last night (sorry) is "How many things can go wrong when working a donor? Lots! I wish people were better communicators and used their common sense!"

Instead, it came out "BLREWORJHSDIOMGIOSNNNNNG!", but you get the idea. Two donors last night, one more going on now. I want my weekend back. (T_T) I can't remember the last time I had three cases in one weekend, but it's been a while. I'm going to be buried in paperwork.

I slept through the doll meet-up today, since I got home at seven in the morning. (Kaoru-kun didn't get to go make friends OR show off his new wig, poor baby. He's all alone at home while his mommy lives at work. ;_;) And I got to attend about 20 minutes of our NDK programming meeting before getting paged, ha, but I caught the major points: Ringo and I will be busy bunnies again this year! I'm very excited. I'd better get sewing~!

He's now sitting on my dresser next to Kaoru-kun. I think Kaoru-kun is a little intimidated by the giant stuffed dog with the bow-tie. Don't worry, Kaoru-kun! You'll be the best of friends soon, you just have to understand Kun-kun's genius.

Working a donor! It's been a while, I didn't have any in March. No joke! So it's been hard to get back into the groove... the testing itself is no problem, but the motivation to come in to work on the weekend is rather lacking. z_z

I bought lots of fabric scraps at the Denver Fabrics close-out to make outfits for Kaoru-kun. He needs tiny sweaters! [shakes fist] Oh god, I thought I was bad about hordeing fabric before, but now that small pieces are actually useful? Eeeep.

I'm chugging water to get ready to donate blood tomorrow. My iron was low when I went in for my prelim, but I ought to be better by now. [nod nod]

So, in good news, I got the promotion! I find out what my raise is tomorrow. I'm hoping for "Something Large". ^_^ Friday was a great day; it was payday, I found out about the job, Fishstick and Momoko were shipped, AND I got a fantastic towel from Minako-chan. Lucky lucky little me!

Fishstick has a full little outfit waiting for him now, I'm very excited. #^_^#

I managed to get through April Fools Day fairly unharmed, which isn't to say I made all the right choices. ;) Let's just say it ended with me downloading the raw version of Gakuen Heaven, which I really should have done to begin with. ;>_< If you can't make a penis joke that I haven't heard before, then you don't deserve to joke-subtitle Gakuen Heaven, bitches!

Wednesday I have to give a ten minute presentation at work to try and get a promotion I applied for. I bought play-doh and bouncy balls to help with explanations, and plan on drawing on a dry-erase board liberally. If they're not looking for someone who's going to teach using lots of pictures and diagrams, then they don't want me for the position.

Ringo-chan did a lot of pattern drafting today, while I laid on her bed and sewed a little raglan-sleeve t-shirt for Fishstick. (No, that's not really his name, it's just his nickname. I don't want to assign him a real name until he actually shows up. We've still got a couple weeks yet to wait.) I think it's awfully cute, I hope it fits well. ^_^ I'm completely sold on the usefulness of tiny quilting irons for pressing 1/4 inch seams. Now he just needs pants to hide his shame. v_v

House-cleaning will continue this week. Must get Room of Shame in order so I can mess it up again!
Collapse